YES! SEND THE GAME PLAN FOR
FINISHING THE YEAR STRONG

WE PROMISE. NO SPAM. EVER.

This message is dedicated to the non-conformists, the crazy ones, the misfits, the rebels, the weirdos, the troublemakers, the round pegs in the square holes… the unorthodox ones who see and do things differently…the ones who like a challenge.

These are the people who choose to live on the wild side, and who beautifully embody Dr Seuss’s quote…“Why fit in when you were born to stand out?”

Theodor Geisel was an American writer, poet, and cartoonist who published children’s books under the Dr. Seuss pen name, which he started using in 1927 as a joking reference to his father’s wish for him to become a doctor.

If the famed children’s book writer were still alive, he would have turned 112 today.

Geisel’s rise is a story of the triumph of simplicity AND the direct response to a good old-fashioned challenge.

By the mid 1950s, Geisel had achieved a fair amount in his career, but nothing like what was to come.

He had already published thirteen children’s books under the Dr. Seuss pen name, and while the books had received critical acclaim, they experienced only modest sales.

Around the same time, parents and educators began to fear that American children were falling behind their European counterparts in terms of their educational achievement.

It was a widely held belief that they watched too much TV, and children’s books were too boring to captivate them.

Concerns about the poor state of early childhood education even became a national security concern.

In stepped William Spaulding, then director of the education division at Houghton  Mifflin. He too was concerned about this issue, and he was in a position to do something about it.

Spaulding had an epiphany and approached Geisel with a challenge.

Spaulding had identified 348 words that first graders should know, and he challenged Geisel to write an imaginative and captivating book using only those words.

You'll learn how to achieve more in the next 100 days than most people do over the course of 10 years.
Click to Tweet

RISE TO THE CHALLENGE

Geisel initially considered the challenge “impossible and ridiculous”, but he decided that it was a challenge worth pursuing.

The resulting book, The Cat in the Hat, only used 236 different words, but those 236 words started a phenomenon.

The Cat in the Hat was published in 1957 and became one of the bestselling children’s books of all time.

Within three years, the book had already sold one million copies. Today, more than fifty years after publication, it remains a bestseller with more than 12 million copies sold.

Emboldened by the success of The Cat in the Hat’s parsimony, Geisel took this austerity of words even further.

Another publisher challenged him that he could not write a book using just 50 words.

Geisel took on that challenge and delivered another iconic children’s book which consisted of just 50 words, Green Eggs and Ham.

Nearly twenty-five years after his death, Dr. Seuss continues to dominate the world of children’s books to an astonishing degree…and it all started due to his willingness to take on a big challenging goal and make the impossible possible. 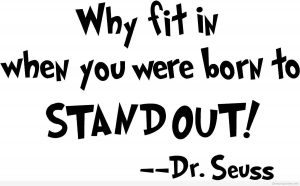 ARE YOU READY FOR A CHALLENGE?

I believe Dr Seuss’s story is your story…as it’s only by being challenged, by being tested and pushed to your limits that you are able to find out what we are really made of, and finally able to unleash our greatness.

And not just physically challenged. We need intellectual, leadership, spiritual, relational, sales, and any type of performance challenge that stretches us, forces us to overcome adversity, tests our character and commitment, and inspires us to say adios to our comfort
zone.

When will your finest hour come, and how will it arrive?

Do you really think it will materialize without a challenge, without your perseverance being tested and without you being pushed to your limits?

In short, for an individual, team, company, community, or country to become great, they must seek out and rise to the great challenges that are thrust upon them.

There is no other way, and that’s why you’re going to love the 100 Day Challenge which opens for enrollment in just a few days.

You’ll not only be tested, pushed, prodded and provoked…you’ll learn how to achieve more in the next 100 days than most people do over the course of 10 years.

If that idea sounds exciting…go here to get all the details, and be sure to absorb everything in this manifesto.

Make it the very next thing you do.

P.S. If you prefer an mp3 version of the manifesto….here you go!

What Amazing Goal Could You Achieve in 100 Days?

You're just 100 days from transforming your life... from crushing your goals... getting in great shape... becoming debt free... skyrocketing your sales and income and achieving ANY goal you want in record time.